Bucky : A short film produced by my company KMBA Productions 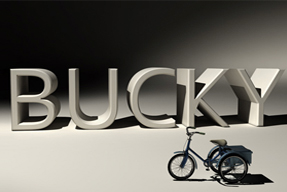 KMBA PRODUCTIONS is pleased to be working on Danny’s short film, ‘BUCKY’. It is a story seen from the eyes of a five-year-old boy, who through no fault of his own comes face to face with disaster.

Danny is no stranger to writing and directing having had his short story ‘Night Talker’ broadcast on BBC Radio 7 and his directorial debut, ‘Tongue Tied’, the Red Dwarf single and video, reaching No 17 in the National Charts.

A 1950′s tricycle features heavily in ‘BUCKY’ and is the reason Motoventures got involved. Having sourced a motorbike and sidecar for Danny to ride in the BBC drama, ‘Death in Paradise‘ and also the pink Yamaha R1s for last year’s Viva Valencia trip, Steve took it upon himself to find the tricycle.

This he found at the Amberley museum and with their help has managed to borrow a circa 1950′s tricycle for the film shoot.

Danny recently inquired on his Twitter and Facebook pages if people would be willing to get involved in sponsoring or funding the ‘BUCKY’ project and the response was amazing. This was without anyone knowing the storyline or if there was even a script.

‘Bucky’ will serve as a public information film as well as going to all the film festivals.

Your response so far has heartwarming. We have already reached nearly 20% of our target budget. Now lets get this film finished and out there.